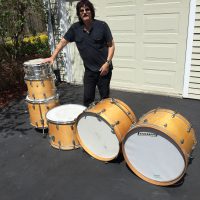 This is Carmine Appice’s original 1969, Vanilla Fudge, Ludwig “Thermo-Gloss” 3 ply maple double bass drum set. The set is from very early in Appice’s career. He literally “invented” much of rock drumming on this very set. The set is particularly significant since this is the set that inspired Led Zepplin’s John Bonham’s legendary maple … Read More