From the collection of Quiet Riot drummer Frankie Banali.
This pair on North concert toms can be seen prominently on the front of Frankie’s drum set in Quiet Riot’s 1983 “Metal Health” video. Frankie talks about them in his 2015 Facebook post.
December 23, 2015
THROWBACK THURSDAY: ON THE 1983 SET OF THE “METAL HEALTH” VIDEO SHOOT & A CLEAR VIEW OF MY NORTH TOMS. AND YES 32 YEARS LATER…. 2015 AND I STILL HAVE THESE TWO NORTH TOMS! THEY LOOK WORSE IN THE PICTURE THAN THEY REALLY ARE & DURING MY CHRISTMAS BREAK I PLAN TO WORK ON THEM TO REMOVE THE SURFACE SCRATCHES! THEY STILL SOUND GREAT!
The drums are structurally in excellent condition but show scuffs and scratches from years of use.
Includes a pair of Frankie’s signature Vic Firth Quiet Riot drumsticks. Certificate of authenticity signed by Regina Banali.
Shipped from Seattle, WA. We will ship internationally.
Single click image to enlarge. 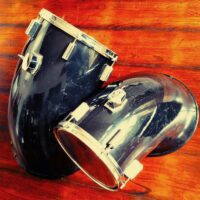 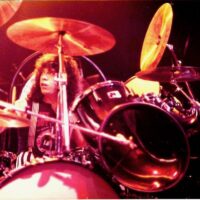 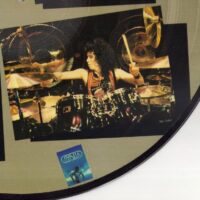