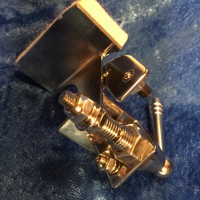 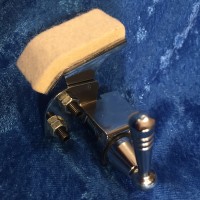 The great minds at Canopus drums have re-created one of the most ingenious drum accessories of all time. Their CIM -20 Baseball Bat Inner Muffler picks up where the legendary Ludwig internal “Baseball Bat” muffler left off with a couple really versatile and useful updates.

For many years an internal muffler was standard equipment on virtually any drum you could buy. As more versatile external muffling systems like Zero-Rings, Moon-Gels and huge wads of duct tape (ha!) became available, the internal muffler fell out of favor and pretty much became extinct. Drummers would frequently remove the mufflers as they would rattle and make noise so drum makers were happy to eliminate them as it helped keep costs down. Probably the most popular internal muffler of all time was the Ludwig “baseball bat” muffler. This muffler played a huge part in the way drums sounded in the 60s and 70s. It gave a drum a nice thuddy “thump” sound that was very popular in the music of the day. The original muffler had 2 major flaws. First, it was fairly light weight and would often come apart leaving the drummer with an array of nuts and washers bouncing around inside his snare. Second, the muffler would not stay in place, particularly under heavy playing. As rock and roll became louder and louder this problem just got worse.

Enter the Canopus CIM-20 Baseball Bat Inner Muffler. This muffler looks pretty much identical the Ludwig predecessor but simply works perfectly and address’s the shortcomings of it’s predecessor. There’s one lock nut on the inner lever shaft that assures all of the parts below it will stay in place. The coolest part of this muffler are the 3 locking positions. The felt muffling pad can be positioned into a “light”,  “full” position or completely off position giving the user 3 levels of muffling. More importantly, these positions lock in place so you don’t have to worry about it backing off while you play. Also since it’s so solidly constructed you don’t have to worry about any unwanted rattles.
The muffler requires no extra drilling on vintage drums as it will fit most drums original holes.
The baseball bat muffler is a classic accessory whose time has come again and updated to handle any kind of modern playing.  Big thanks to the great minds at Canopus drums for bringing this one back better than ever!!