Ive been working on a major restoration of a Top Hat and Cane set for nearly a year now. When I got the set it was basically in pretty good shape but was definitely show signs of its 70+ years. The shells were grimy, the nickel hardware had lost all of it’s shine, a few pieces were missing and some new tom mounts had been put on the toms. Probably because this set is such an historic, iconic, beautiful and valuable set I got very inspired to really bring this set back to it’s original majestic condition. If you’ve ever seen a Top Hat and Cane set you’ll know what I mean. I was also inspired by the stories and photos I received about the original owner. I’ve been tracking down all of the missing parts and sending parts all over the country for polishing and restoring. If you look closely at the nickel hardware on the 11″ tom you’ll see it’s considerably shinier than the rest of the set. I had the hardware on the 11″ buffed with a buffing wheel. The rest was done by hand. Once I saw how much shinier the hardware done on a wheel was I broke down, stripped the remaining hardware off and sent it to be machine buffed. I will be writing an article for NSMD magazine detailing the entire restoration process as soon as it’s done. I’ll keep updating as things progress. With any luck it should all be done in about a month. Until then, here’s a few photos of the set in progress. 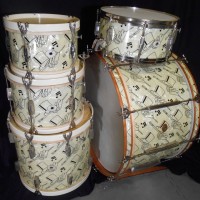 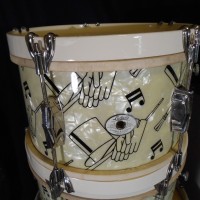 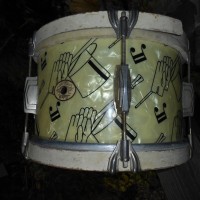 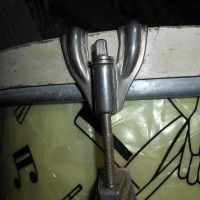 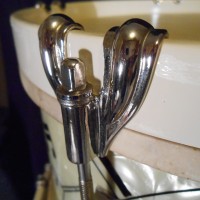