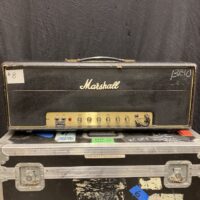 Brad Whitford’s Aerosmith 1974 Marshall, MKII Authenticated! (#164)$9,995.00 Serial #588-2F From the Brad Whitford Collection at Donn Bennett’s Drum Vault. Brad had the guys at Voo-Doo do their legendary mods to this amp in preparation for Aerosmith’s 2017 tour. Here’s what Voo-Doo founder Trace Davis reported on what they did to the amp. “We cleaned … Read More