Whoa man!! The amazing gear just keeps finding it’s way to Donn Bennett’s Drum Vault!
This DW Timeless Timber 25th Anniversary is OFF THE CHAIN!! I don’t know where to start…Do I gush about how amazing these drums made from 500 year old wood harvested from the bottom of Lake Erie sound? Do I blabber about the amazing beauty of the Anniversary Amber finish over book-matched FLAME Maple shells hand inlaid custom DW artwork, all gold hardware and “artist only” mini-lugs? Do I pontificate about the extraordinary history of the DW Drum Company that this set was made to celebrate? Do I attempt to explain the unfathomable rarity of this “One of One”  custom set and all of the “artist only” special touches that were reserved for the drummer of possibly the most influential American rock-jazz-pop band ever? Do I ramble on in disbelief about the amazing near new condition of a set 24 year old set that spent 2 years on the road and in the studio with one of the hardest touring bands ever?  Will I even be able to muster the strength to talk about all the cool added bonuses?
I’m freakin’ out!!
The DW Timeless Timber 25th Anniversary Collection was an extremely limited run of 75 sets made to commemorate the 25th anniversary of the Drum Workshop Drum Company in 1998. Initially, their plan was to make each set a custom order, to whatever specs the buyer wanted. Once a few custom sets had been made, they discovered that making the book-matched and hand inlaid shells required far more labor than they expected. As a result, production was limited to a small number of pre-determined configurations in one of the three available finishes. That is UNLESS you’re the drummer in Chicago!!  This set was custom made for Tris Imboden, who had been a member of Chicago since 1990. The set was made to his precise specs with several features that were only available to endorsing artists that have never before been seen on a 25th Anniversary set. Membership DOES have it’s privileges!
Here are a few of the unique “Artist Only” features you’ll find on this truly one of a kind set.
-DW Mini-Lugs. These low-mass lugs were initially made available only to endorsing artists.
-The ONLY Timeless Timber 25th “Anniversary Amber” Edge snare ever made.
-The ONLY Timeless Timber 25th Anniversary Woofer ever made.
22×18 bass, 22×5 Woofer, 8×7, 10×8, 12×9, 14×11 and 16×13 suspended toms, 13×5 snare. All gold hardware. Build date of 3/29/98 and order #80066 is stamped in each shell. Each drum is signed by John Good and Don Lombardi and dated 3/30/98. The shells on the entire set are in virtually flawless condition. I went over the entire set and couldn’t find a scratch anywhere. Some of the gold hardware shows some very minor scratches and oxidation (see pics). All toms include DW isolation mounts. May internal micing systems with Shure microphones in both the bass drum and Woofer.
The set includes a complete matching set of Tris’ custom touring flight cases. Each of the three cases is stenciled with a “Chicago” logo. It also includes a pair of Tris’ Vic Firth signature Chicago sticks, a signed “Chicago” logo bass drum head and a COA signed by Tris Imboden.
Tris used the set for roughly 2 years touring and recording with Chicago between 1998 and 2000. This set was used to record Chicago XXV in 1998.
A matching 14×6 Edge snare and a 14×5.5 Craviotto Solid single ply snare seen in the photos were built as a part of the set. They are available separately but not included with the set. No cymbals, stands or hardware are included.
Timeless Timber 25th Anniversary drums have solidly earned their place in the history of the DW Drum Company making them some of the most highly prized drums ever made. The extreme high quality, extraordinary attention to detail and no-holds-barred pursuit of excellence demonstrated in the creation of this set, define the standards that the DW Drum Company were founded on and have guided them throughout their 50 year history. 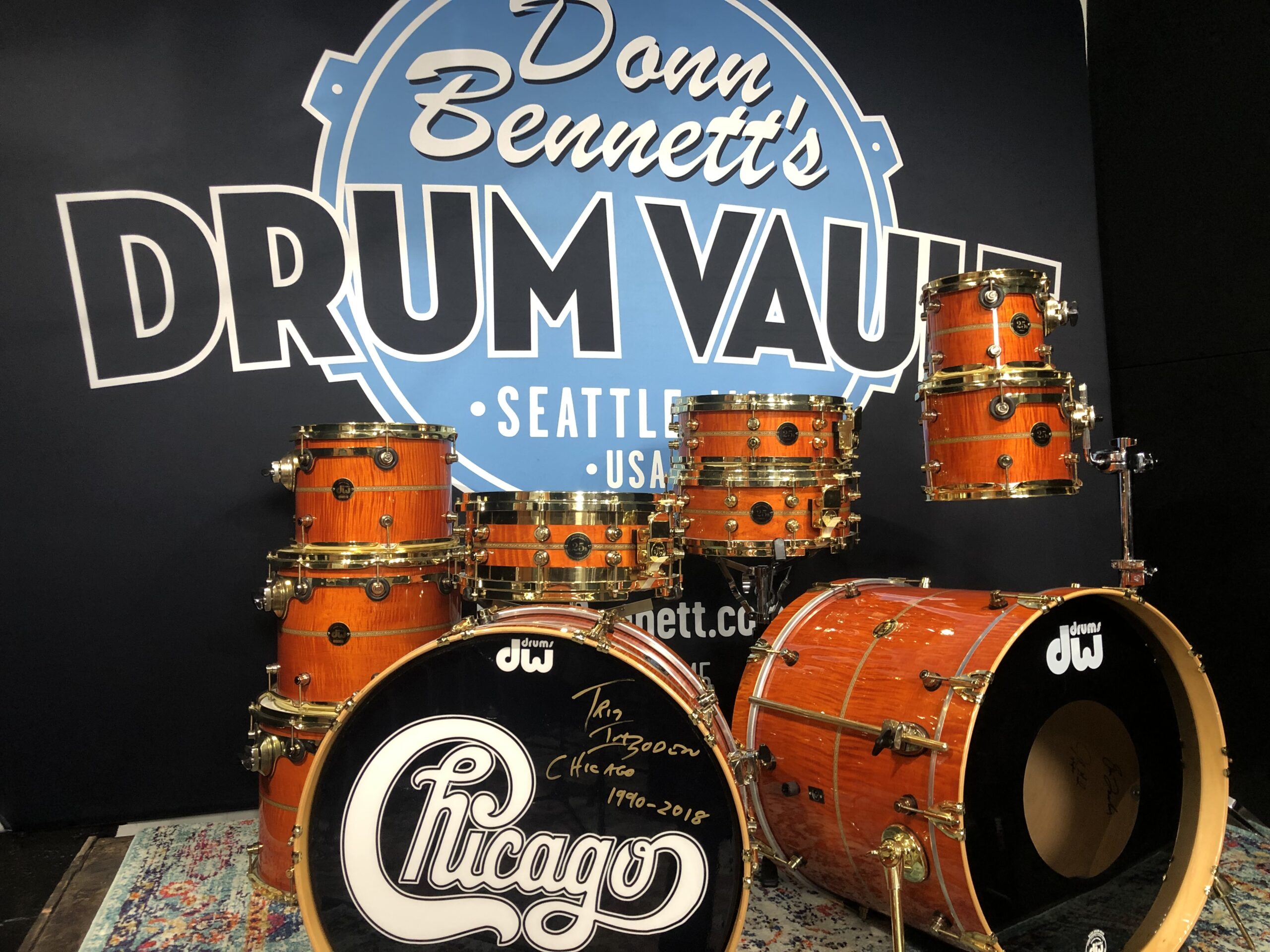 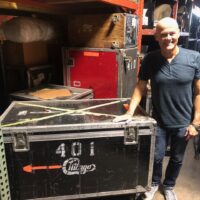 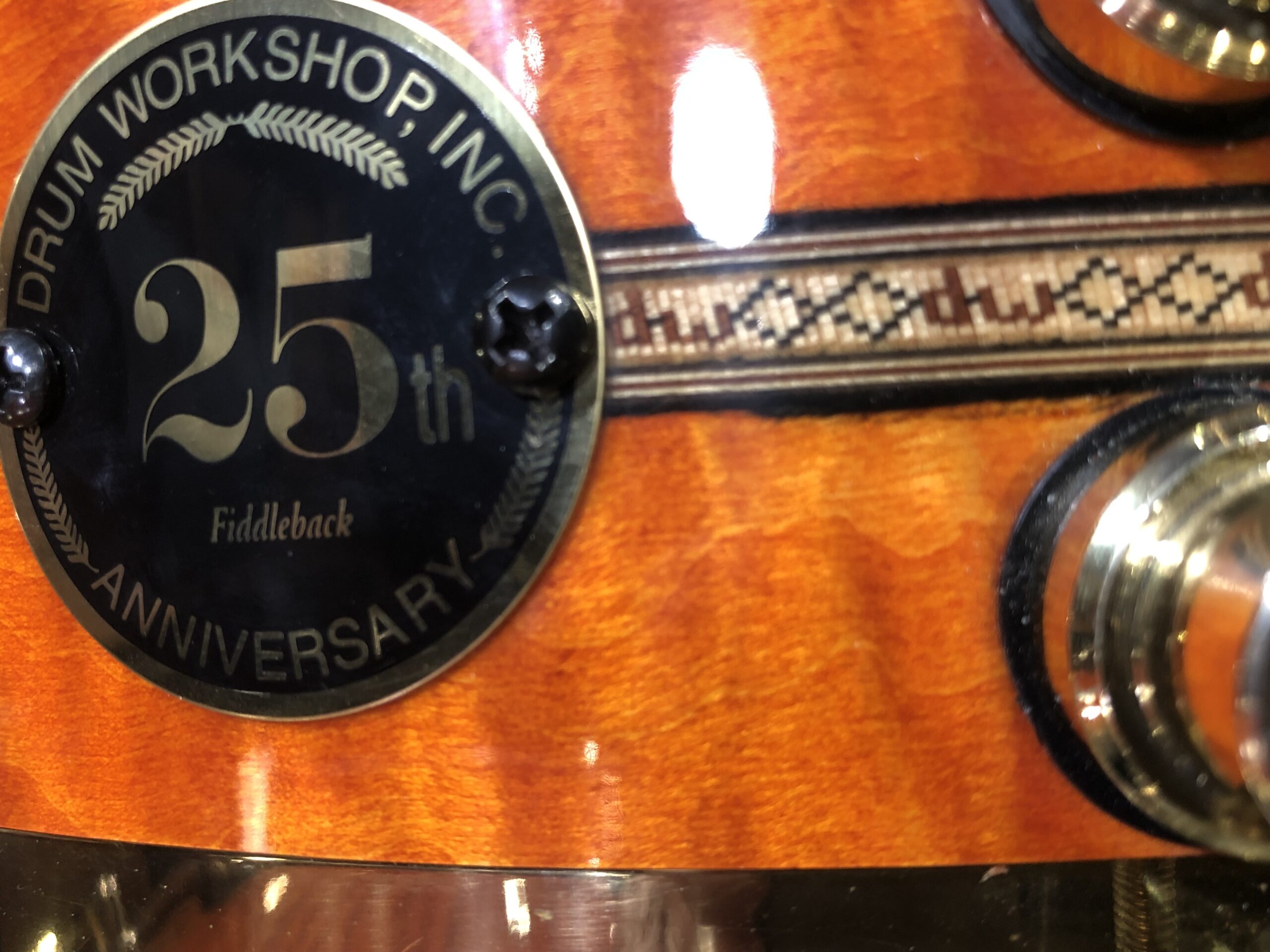 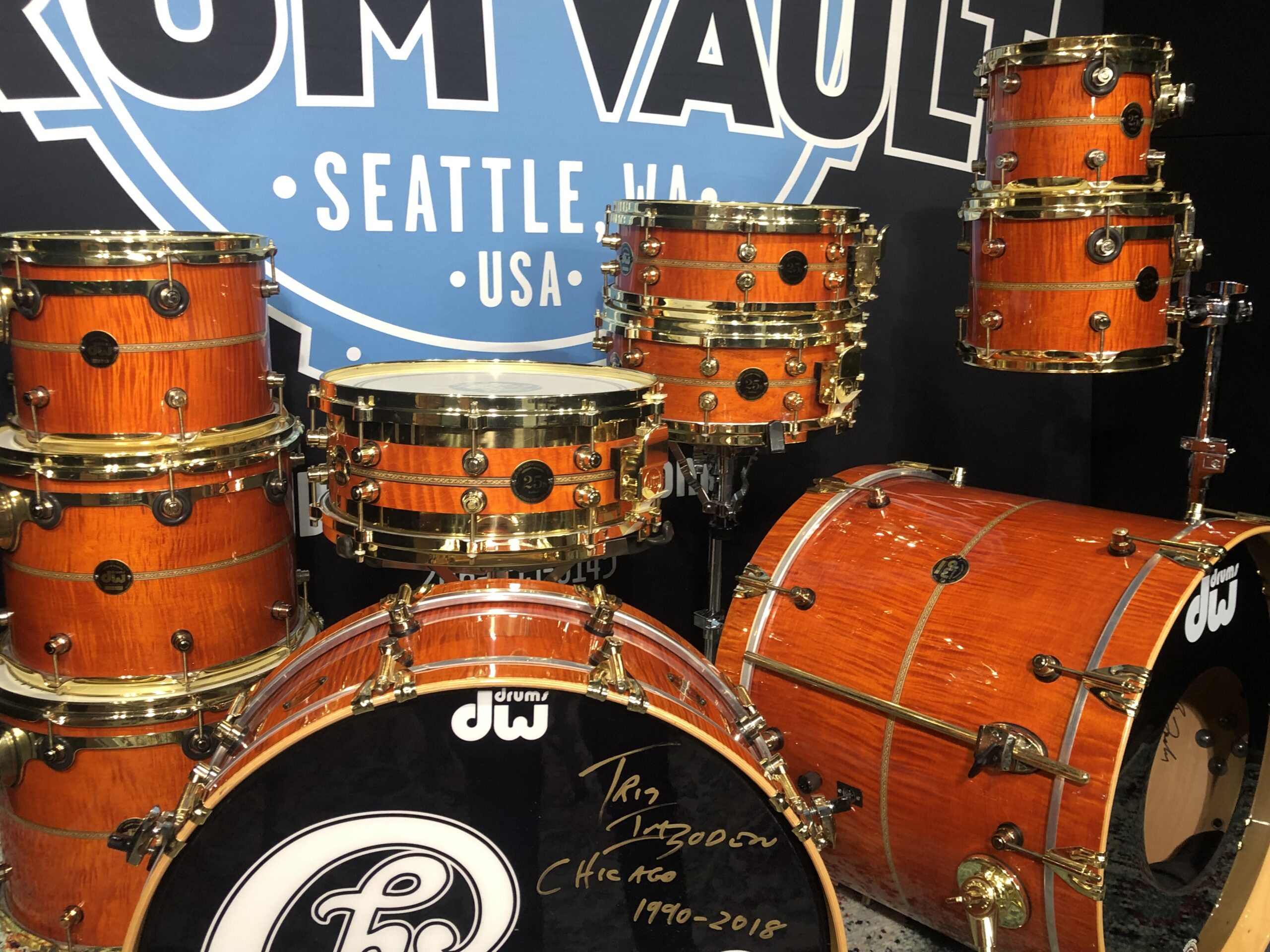 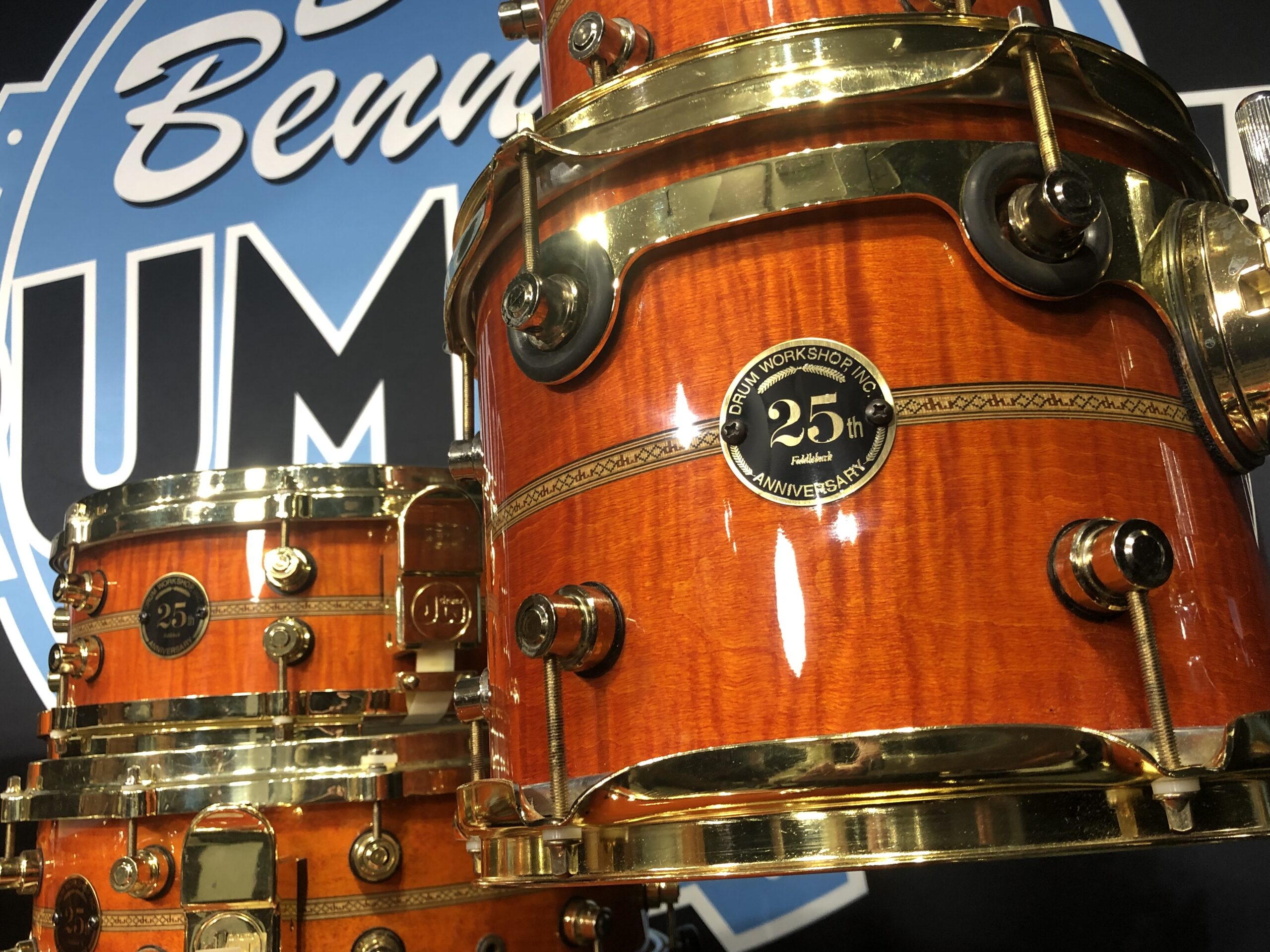 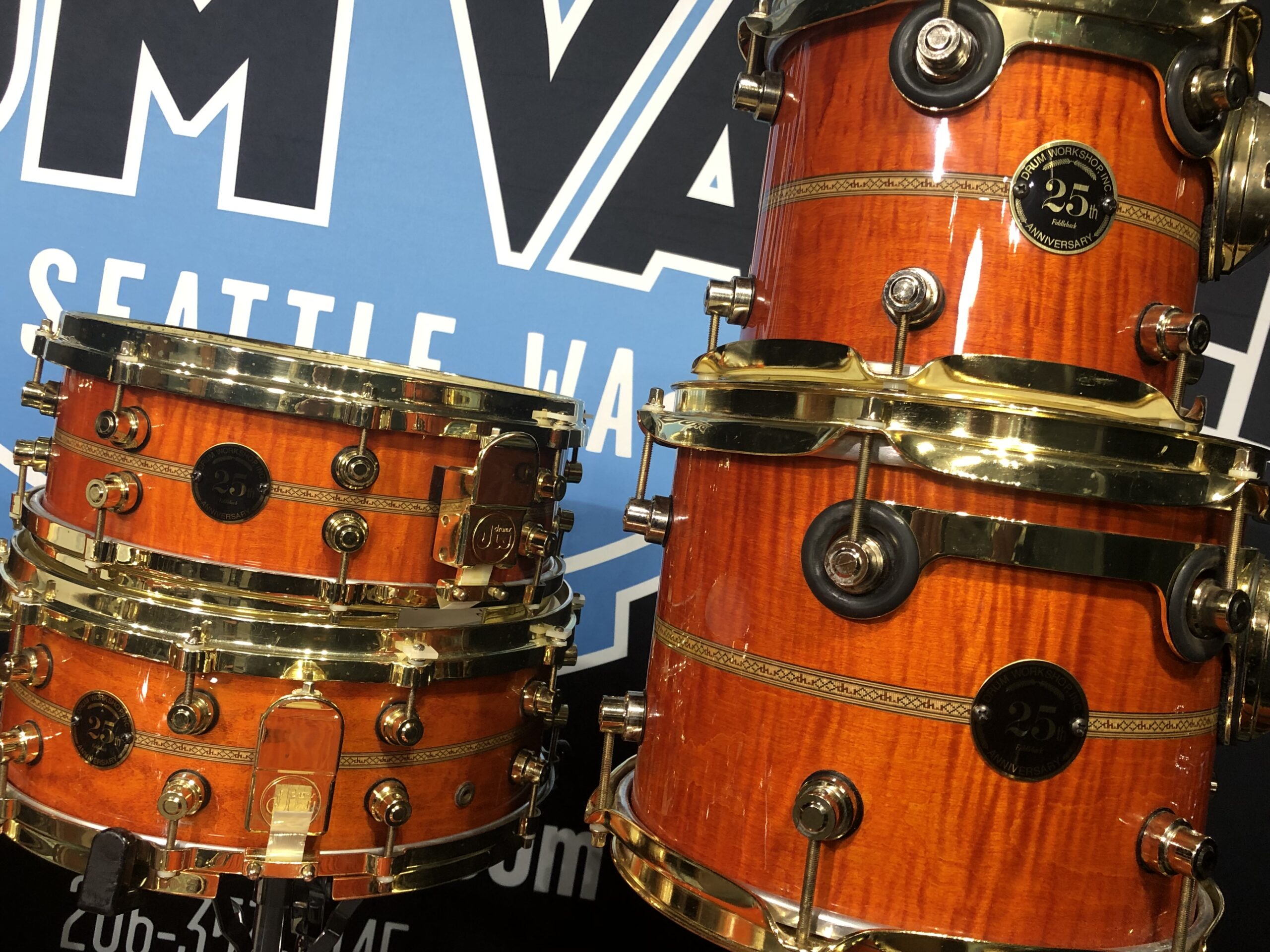 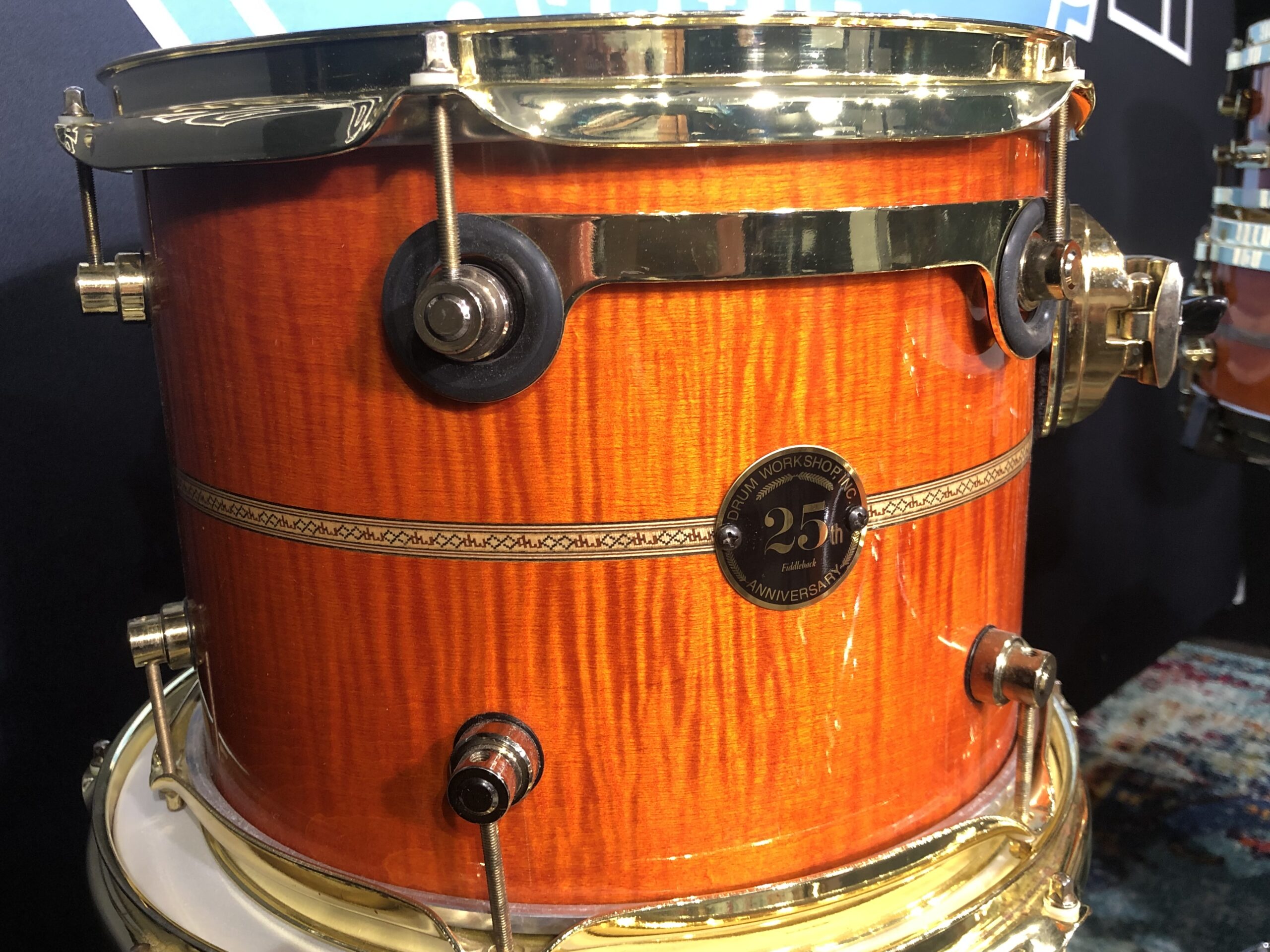 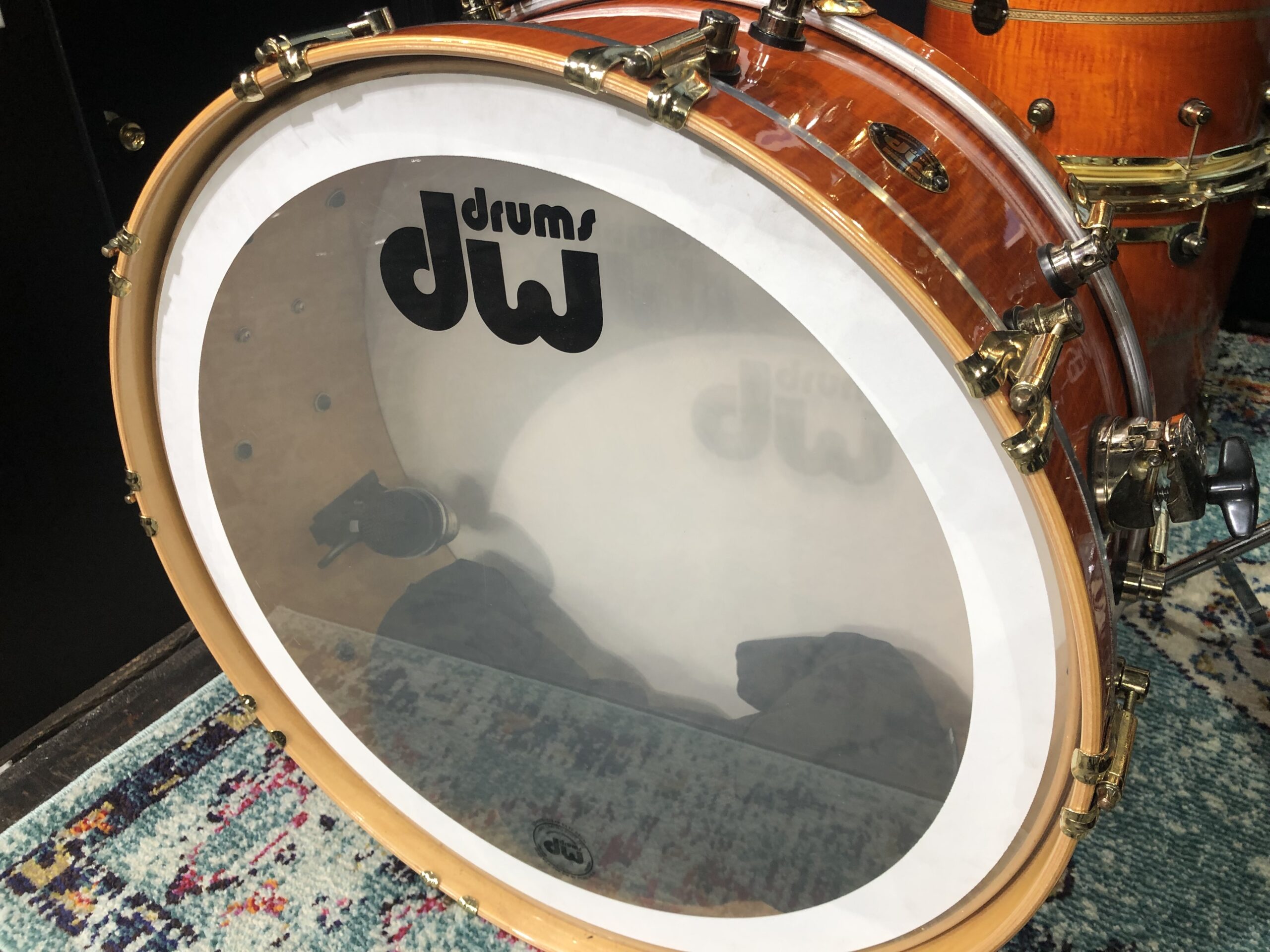 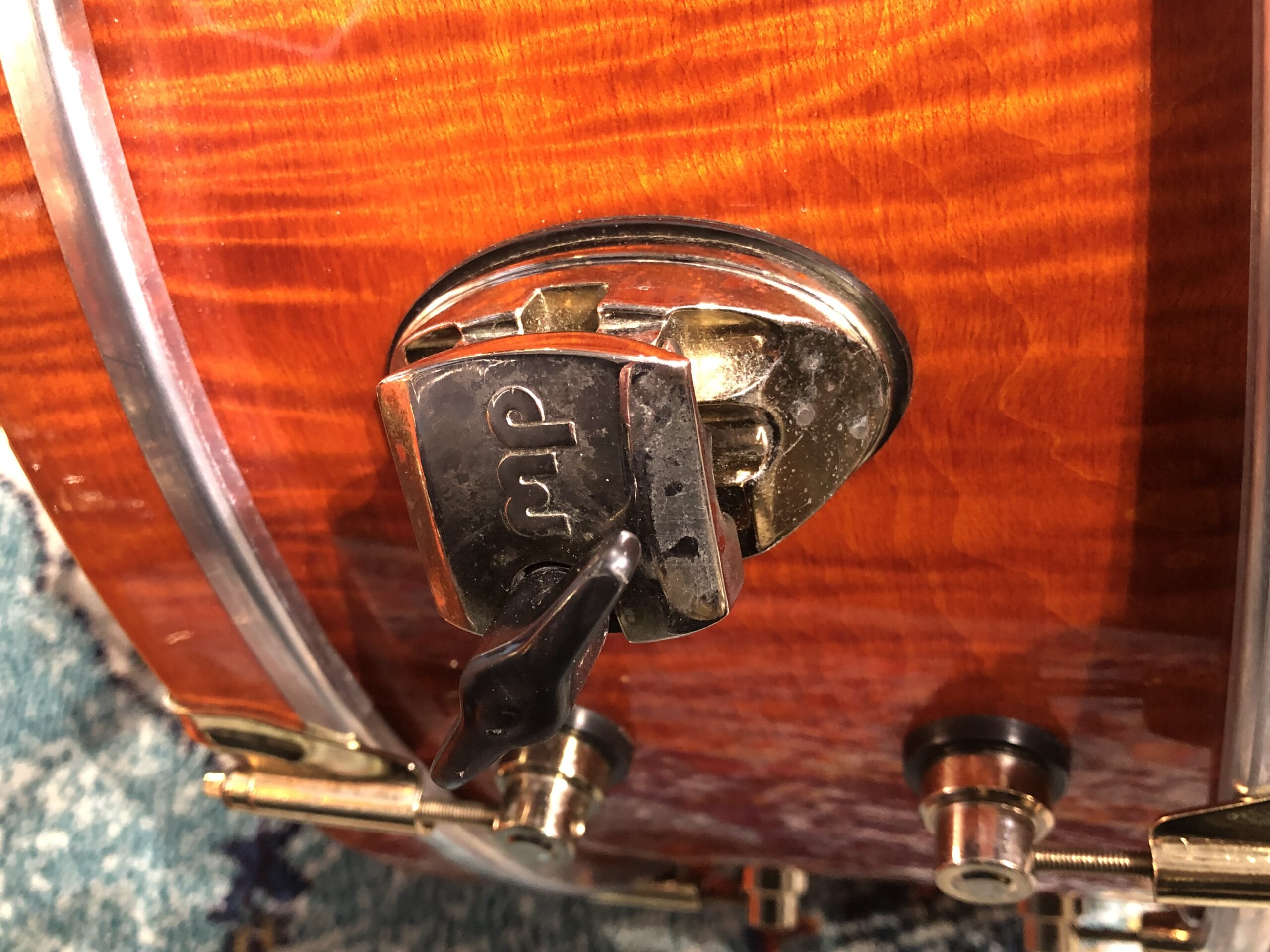 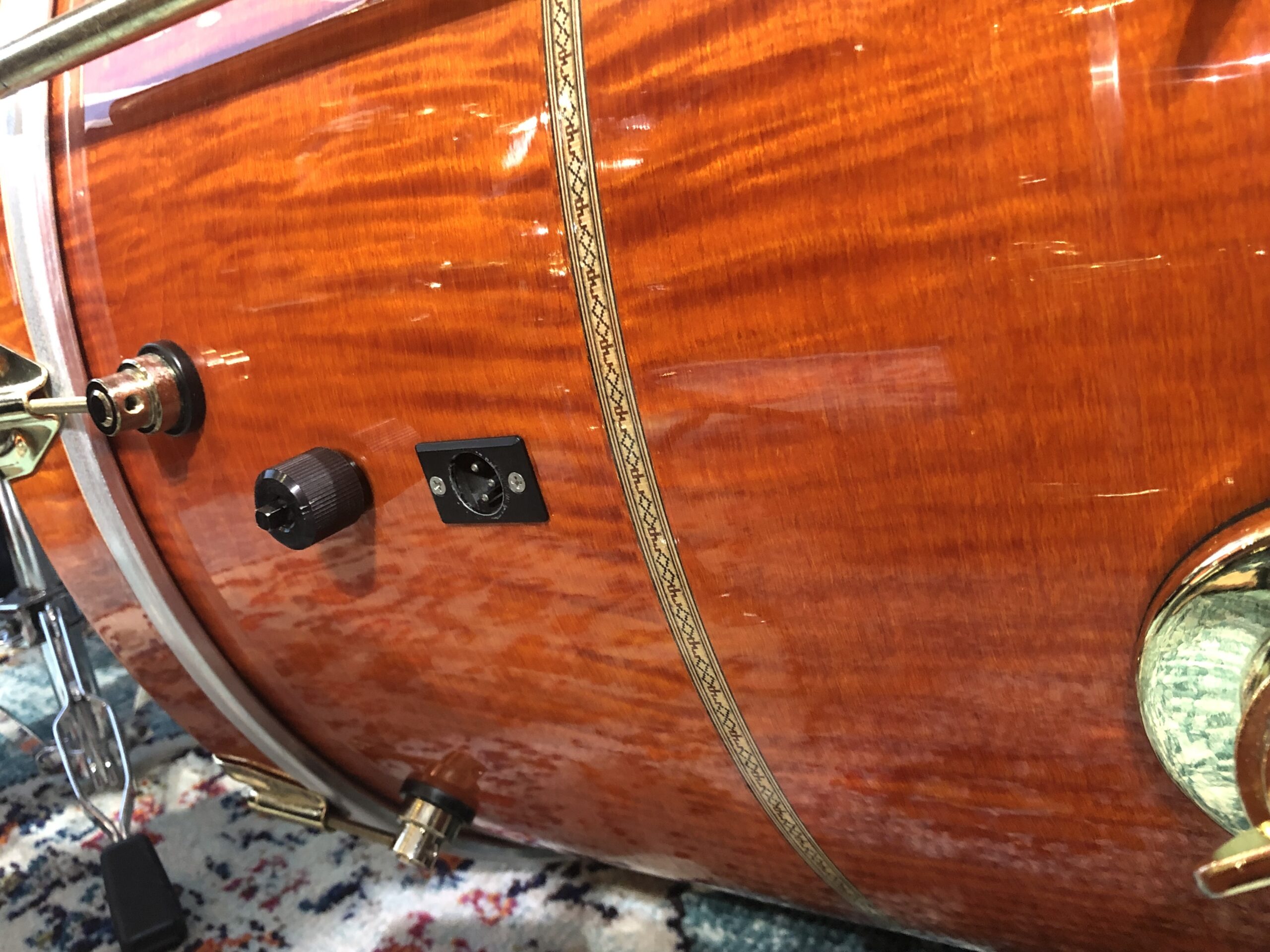 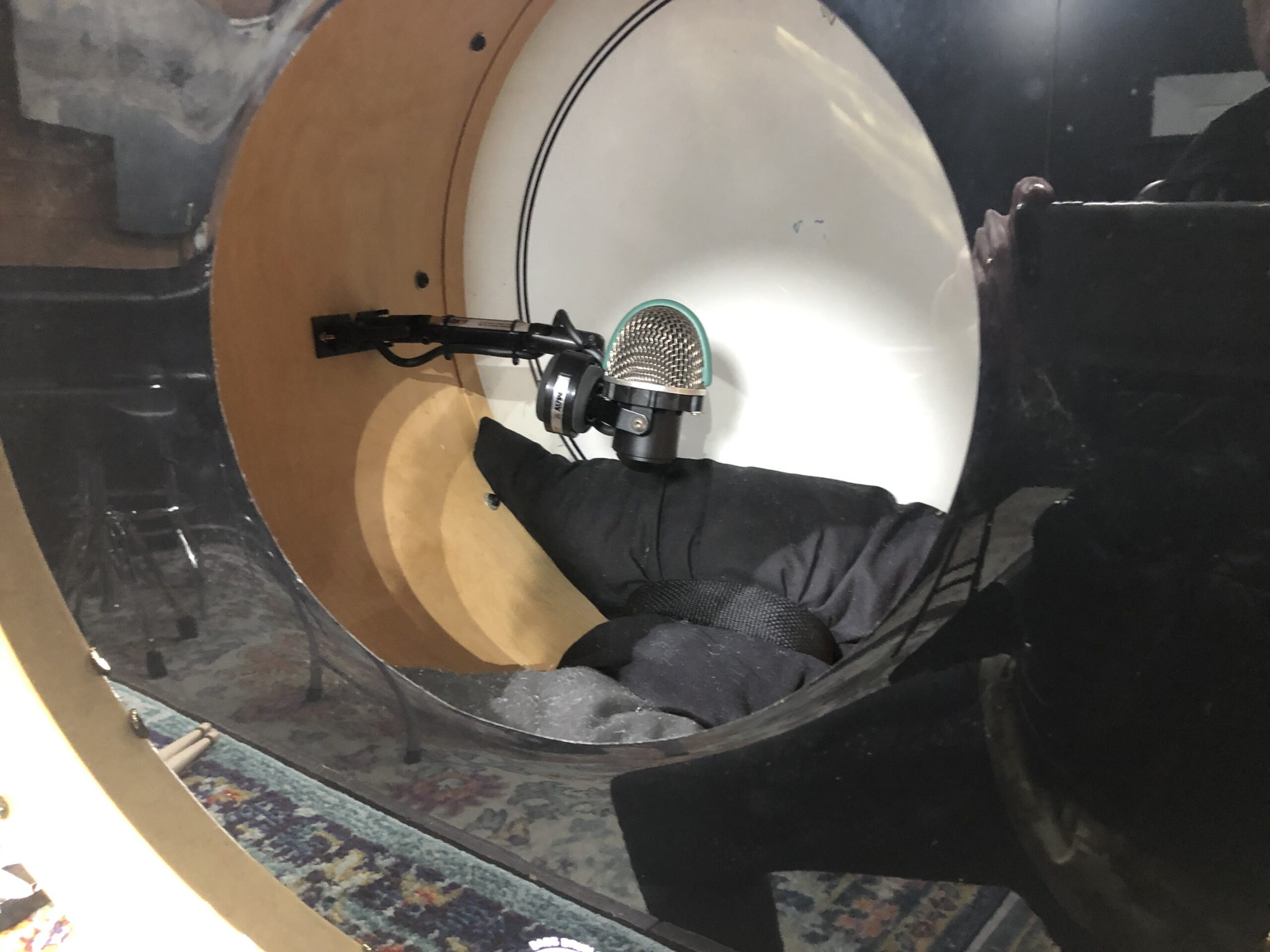 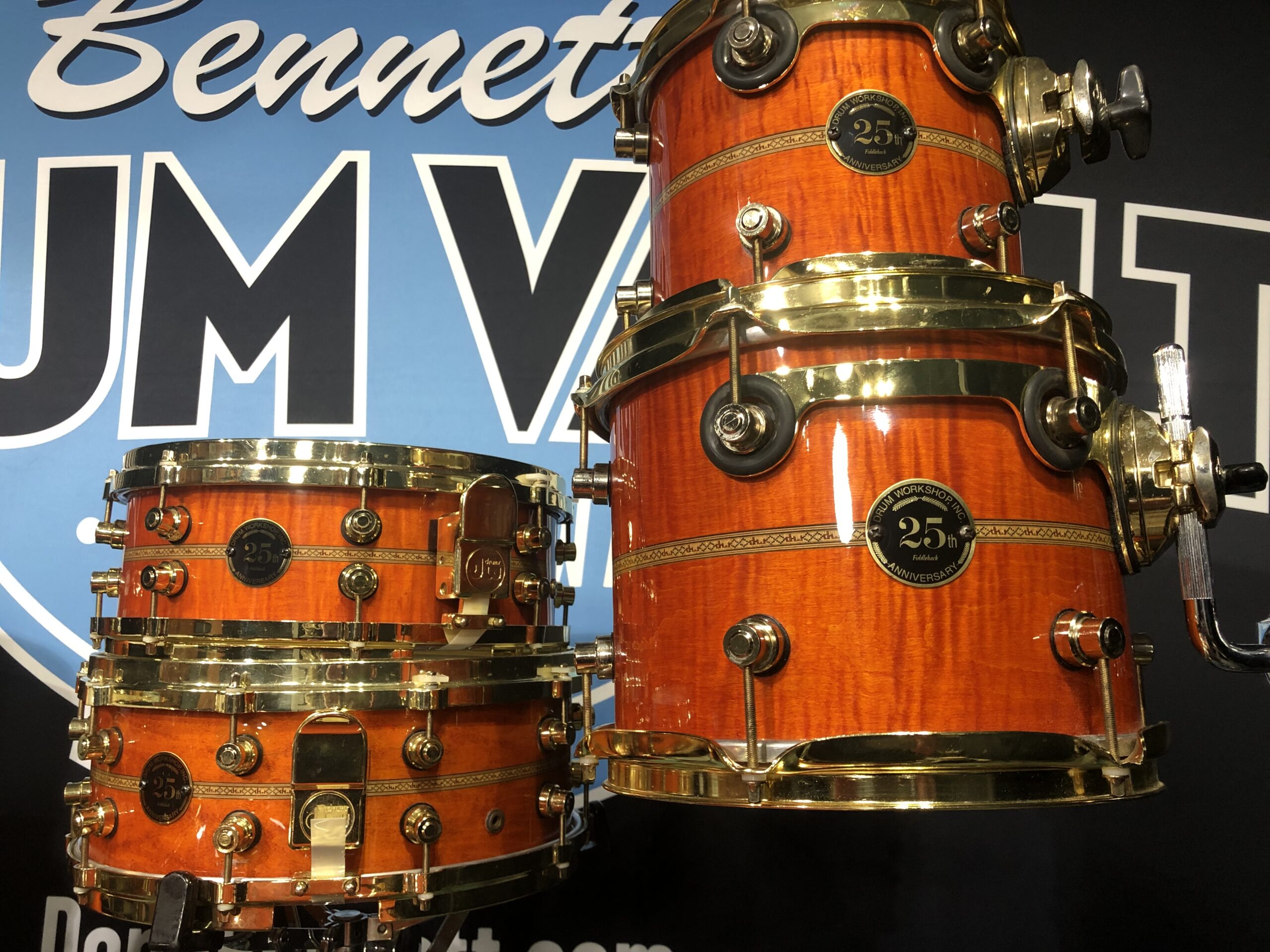 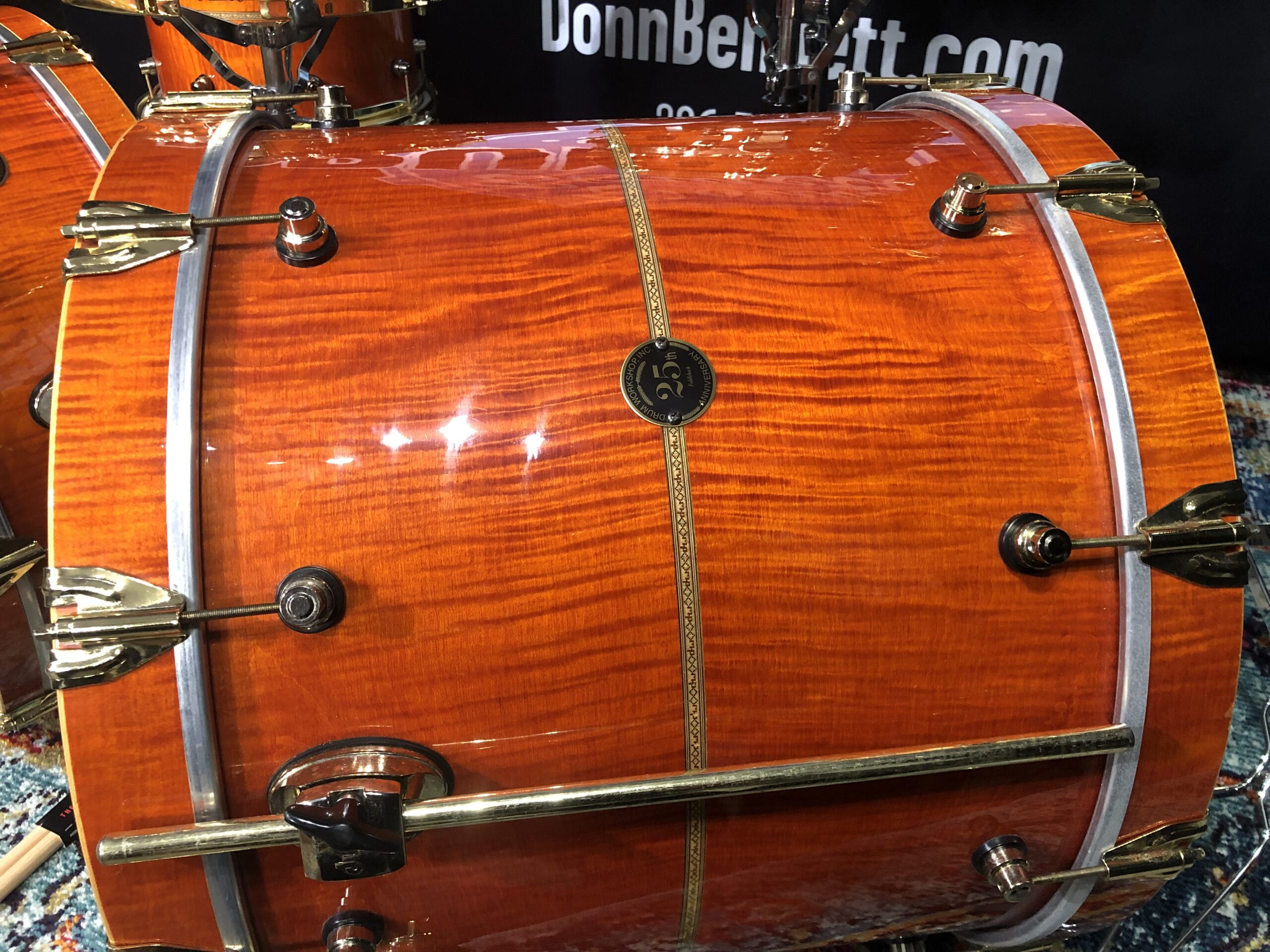 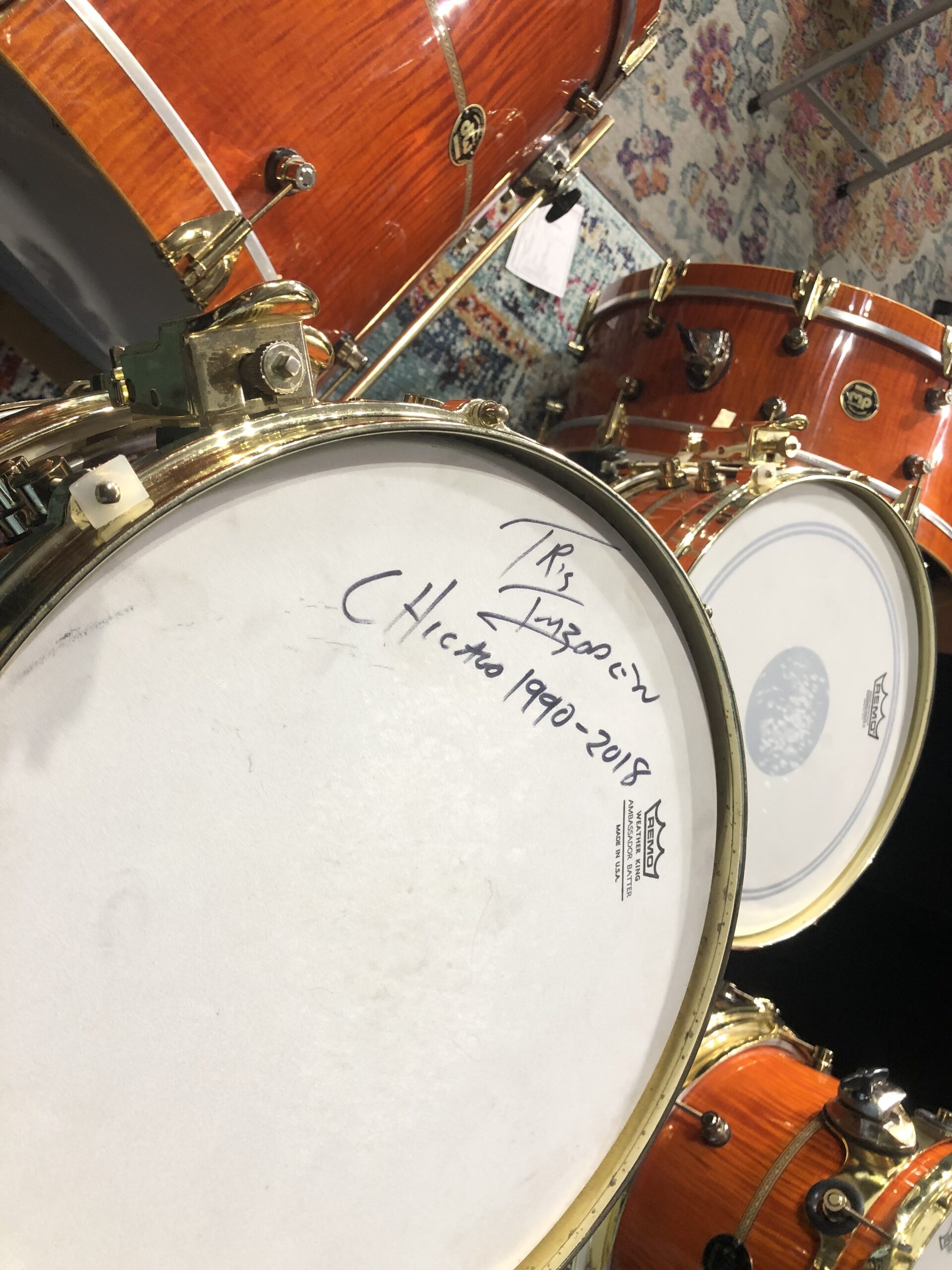 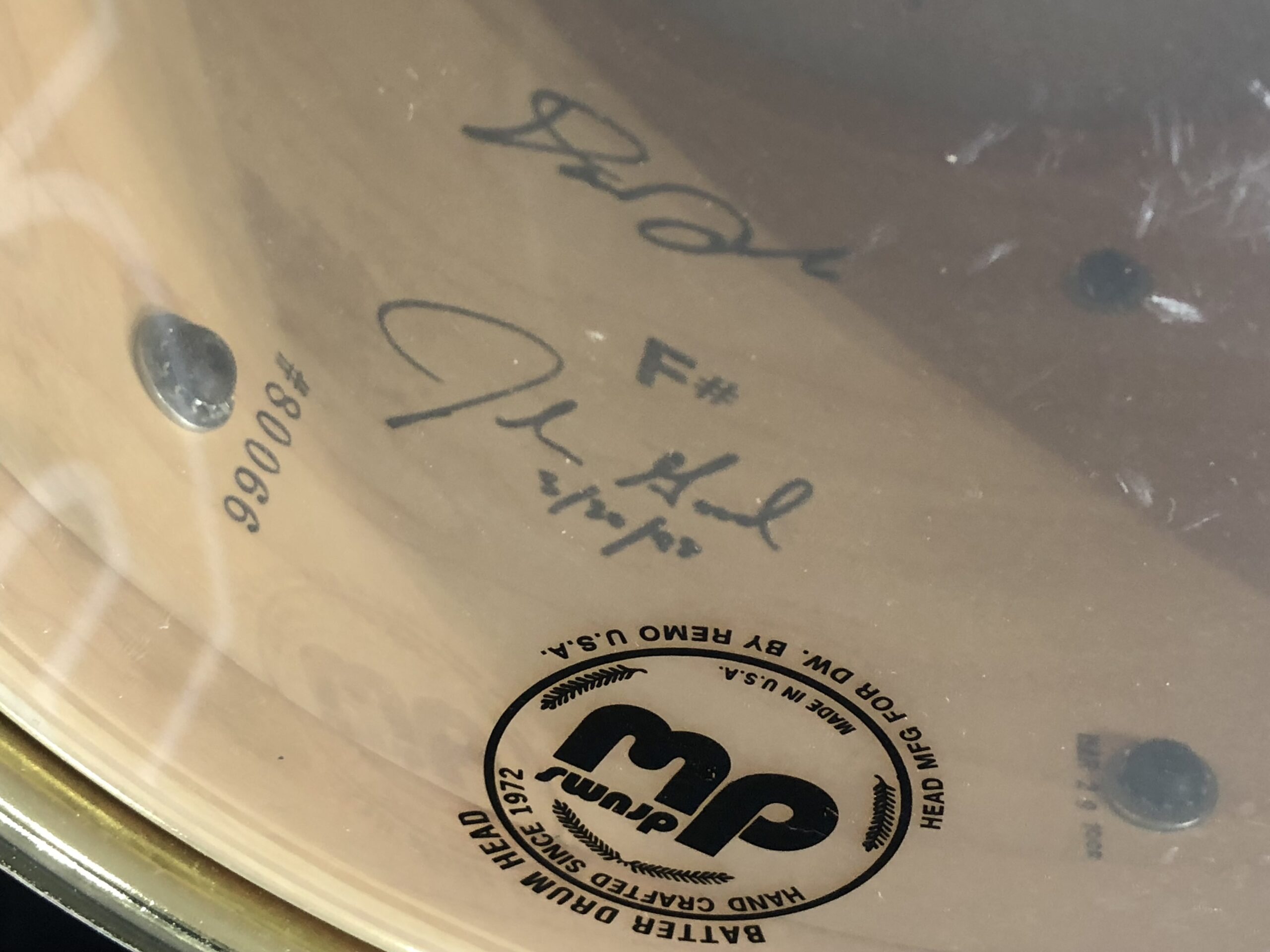 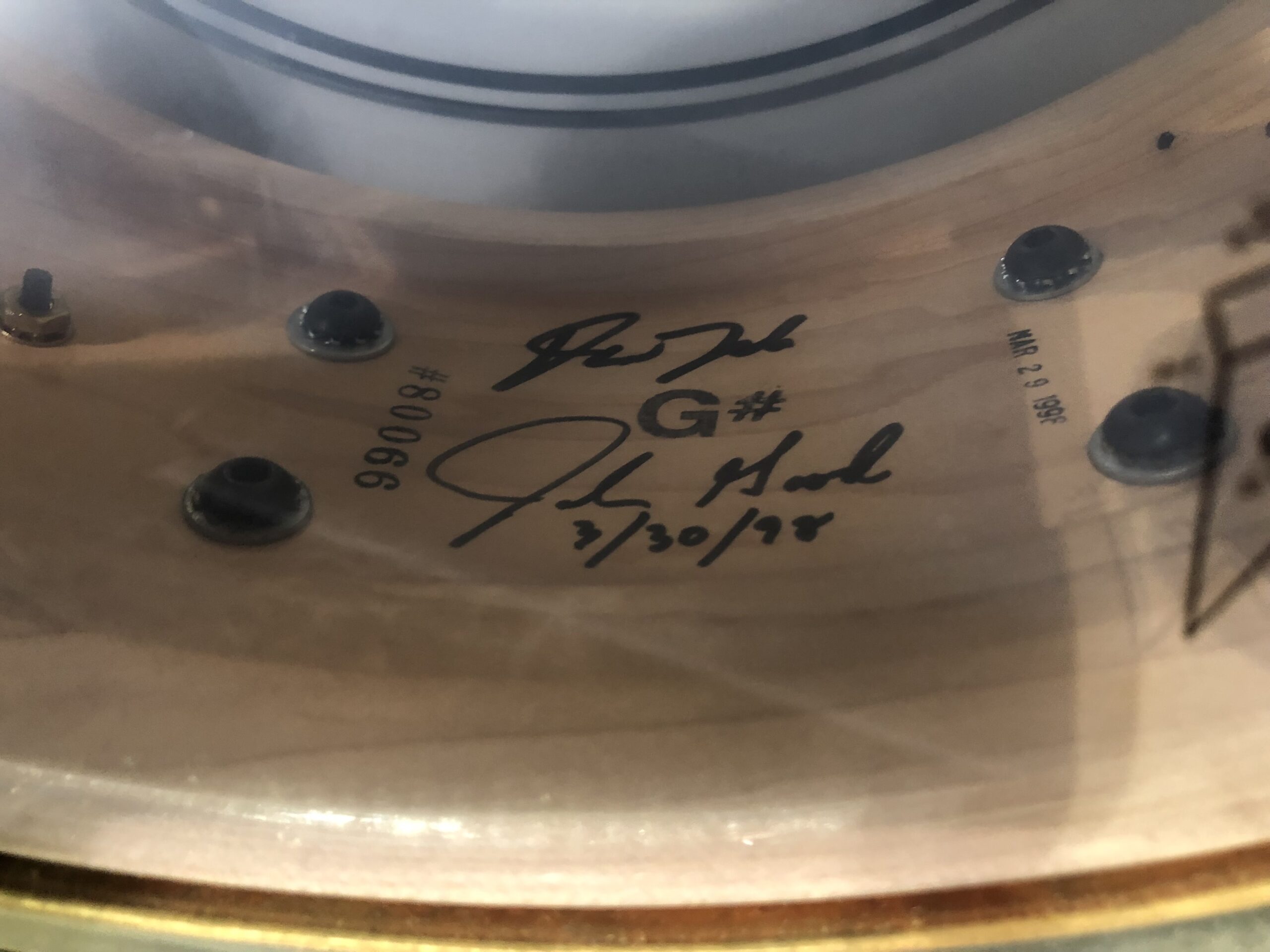 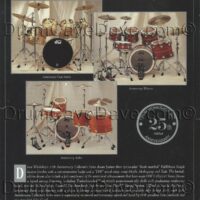 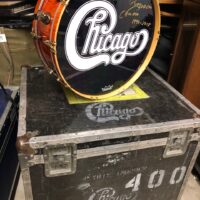 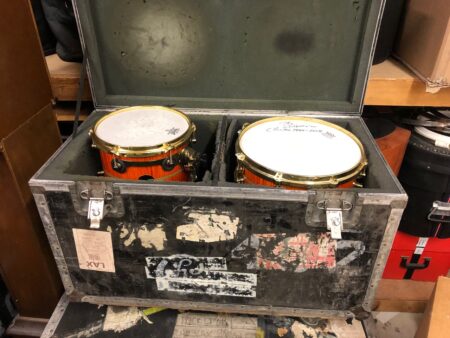